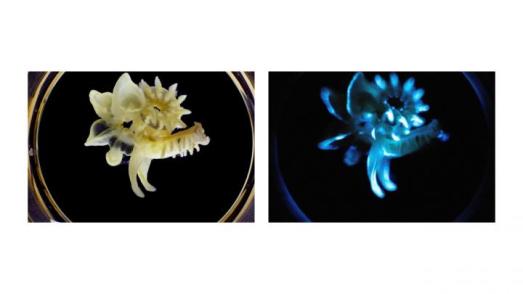 Marine parchment worms have an unusual response to threats. They release a sticky bioluminescent mucus that glows blue. This physiological response is unique because the bioluminescence is constant as opposed to appearing in flashes like other marine organisms. In order to produce sustained light, the mucus would have to contain a source of energy. What they found was that the slime contained an iron protein called ferritin.  When the team added iron to the mucus, it produced light. This led them to suspect that ferritin might store energy, much like a battery.

The research was originally scheduled to be presented at the American Society for Biochemistry and Molecular Biology sessions at the annual Experimental Biology conference last month. But, with the cancellation of the conference, the research was published in an abstract that appears in the May issue of The FASEB Journal.