Improved cognition in male turtles exposed to BPA during development 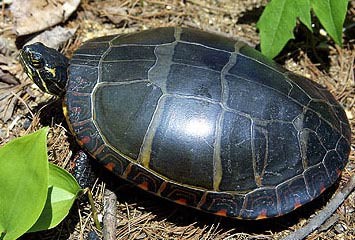 Bisphenol A (BPA) has earned a bad reputation as a potential endocrine disrupting chemical in several studies of developing animals. Some studies even report correlations of BPA levels with certain diseases in humans. Thus it is not surprising there are a plethora of BPA-free food containers, especially for baby food and bottles, as our most common route of exposure is through our diet. It gets there from the epoxy resin lining of some canned foods as well as our use of polycarbonate food containers or tableware.

Turtles and reptiles are also affected by BPA that leaches into their environment. Male turtles and reptiles exposed to BPA during development can undergo partial and even full gonadal sex reversal (i.e. become females) as well as changes in their behavior such as improved memory and spatial learning. To figure out how this happens, a team of researchers treated a group of painted turtles (Chrysemys picta) with BPA. Their findings, published in Physiological Genomics, show genetic changes within the brains of these animals that are indeed associated with improved brain function.