Evidence your dog may be red-green color blind 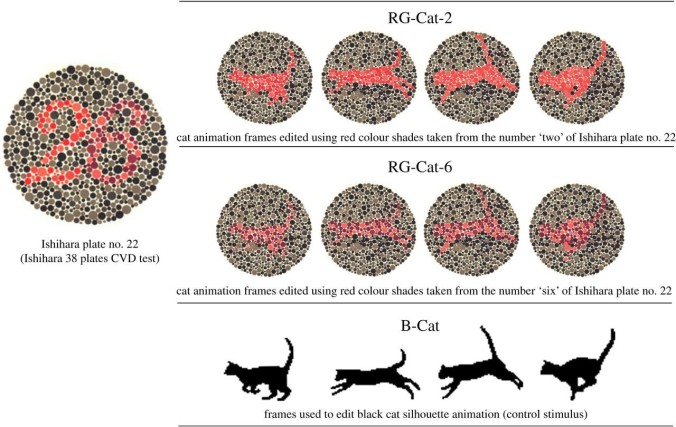 The study examined the ability of dogs to detect colors by exposing animals to a colored image on a screen and measuring the eye, head and whole-body movements in response. The colored image showed a red cat in various running positions surrounded by a green background (shown above). Alternatively, dogs were shown achromatic versions of the running cat images. No motivational or reinforcements were provided to avoid simply assessing learned behaviors.

The researchers found that dogs paid the most attention to the feline silhouettes (B-Cat) followed by the red-green moving animations of the running cats using the red color from the Ishihara plate no. 22 (RG-Cat-2). However, when shown the cat images using the shade of red like the number 6 in the image (i.e. RG-Cat-6), the response was much less. Although the number of animals examined was rather small (only 16), these findings provide evidence that your dog may be red-green color blind.