What do hibernating animals and astronauts have in common?

Well, nothing yet…but imagine the possibilities of human spaceflight if we could put people into a form of stasis? While short term stasis-like states have been used in medical settings, the idea of putting people into stasis to allow long term space travel – without intensive physician oversight, remains a major goal of space agencies and companies like Spaceworks (above).

Scientists at the Comparative Physiology meeting considered this very question, by examining animals that naturally enter states of reduced metabolism, called torpor. They spoke about how hibernating animals have come up with several strategies to survive periods of cold or low food availability from daily bouts of torpor to multiple days of torpor during which time their body temperature and heart rate are reduced. These torpor bouts are sometimes broken up by periods of arousal.

While space agencies and scientists are thinking of ways to induce “synthetic torpor” in humans, there are several challenges that must first be overcome. One of the problems is that humans typically develop organ damage when blood flow to an organ is restored after a blockage or following a period of reduced flow. We also need to overcome the problem of radiation exposure in space. Impressively, nature seems to have come up with solutions to these problems as hibernating animals do not develop organ damage during their arousal periods and some are resistant to radiation while in torpor. For this reason, scientists are turning to the animal world to try to find clues to make synthetic torpor a reality for human spaceflight. 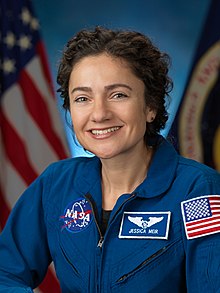 A talk on spaceflight and torpor would not be complete without a guest visit from an astronaut. Who to invite? Why, Astronaut Dr. Jessica Meir, of course (photo above). As a trained Comparative Physiologist and now astronaut, she understands the complexity of this scientific problem. She gave a really good talk on how astronauts train and NASA’s plans to return to the moon and one day bring people to Mars.