The key to the fountain of youth?

I just read an interesting article on the physiology of long-lived species that was published in Physiology.

Some animals seem to have discovered the secret to the fountain of youth. Take the long-lived naked mole rat (Heterocephalus glaber) for example. These animals are able to maintain juvenile traits across their lifespan by growing slowly, having low levels of hormones responsible for development and delaying the onset of sexual maturity. Dwarf mice, an animal model with genetic mutations that extend their lifespan to about one year longer than non-mutated mice, also appear to share these traits.  The ability to keep these juvenile traits even as an adult is called pedomorphy.  Humans are relatively long lived as we have prolonged development to adulthood as well. A more extreme example of pedomorphy also happens in tiger salamanders. These animals can put metamorphosis on hold when environmental conditions are not favorable to development into an adult.

Consistent with prolonged youthfulness, diseases associated with aging such as cancer, cardiovascular disease and neurodegeneration are rare in naked mole rats.  Female naked mole rats do not appear to undergo menopause and can actually continue to reproduce until ~33 years of age. Although, other age-related conditions are observed such as muscle wasting, osteoarthritis, cataracts and dental diseases. Other youthful features include heads that are rather large compared to their body and high amounts of body fat. 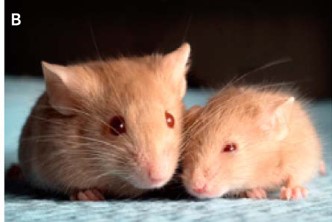 Dwarf mice are aptly named for their small stature as they are approximately 1/3 the size of a non-genetically modified mouse owing to diminished growth hormone secretion or faulty receptors for the hormone. Similar to a naked mole rat, these dwarf mice have reduced reproduction, healthy cardiac function as they age and have lower rates of cancer.

The luxury of species to maintain prolonged youthfulness is thought to have been enabled by environments that are stable, safe and less competitive. This is certainly the case for naked mole rats that live in underground burrows and humans that live in modern societies. In these environments, species are not under pressure to develop and reproduce quickly.