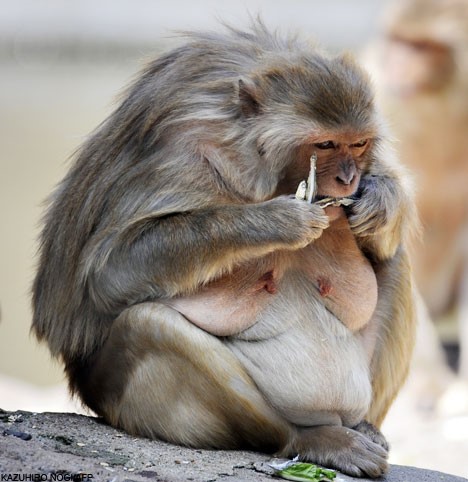 Image of an obese rhesus monkey at a zoo in Japan. Image from Daily Mail.

A new study published in American Journal of Physiology – Endocrinology and Metabolism shows that rhesus monkeys (Macaca mulatta) who spontaneously develop obesity with aging are prone to insulin resistance and diabetes, similar to humans. The major goal of insulin is to lower blood sugar after eating a meal. In line with this goal, muscles respond to insulin by taking up large amounts of the sugar. Similarly, insulin blocks the breakdown of glucose as well as production of new glucose in the liver. This helps prevent glucose release into the blood. It also stimulates glucose uptake and storage in adipose (i.e. fat) tissues and prevents the breakdown of fats. In resistant animals, these effects of insulin are impaired which promotes high blood sugar.

While resistance to insulin has been previously shown in muscles from obese rhesus monkeys, this new study was reportedly the first to show that fat tissues from the animals are also resistant to insulin. The researchers also found that treatment of the animals with an insulin sensitizing medication, pioglitazone, improved insulin sensitivity in the muscle and fat tissues by about 50% after 6 weeks of treatment. These results are similar to clinical studies of obese humans. Helping fight insulin resistance and diabetes in rhesus monkeys may also lead to new strategies to treat these diseases in humans.