How Ossabaw Island swine are helping us understand obesity and diabetes 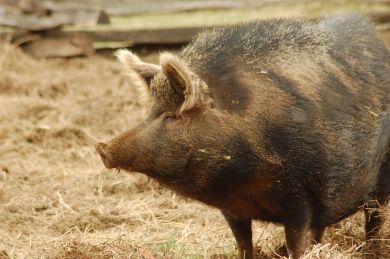 Image of an Ossabaw Island hog by Carly & Art from Washington, DC via Wikimedia Commons

Ossabaw Island off the coast of Georgia (United States) is home to feral swine brought over by early Spanish explorers. In relative isolation on the island, with the exception of the introduction of a Hampshire pig, the Ossabaw pigs have become genetically distinct from those living on the mainland. Ossabaw pigs are prone to obesity and are the only miniature pigs known to develop type 2 diabetes. For these reasons, Ossabaw swine are very important and useful animal models to understand the development and progression of obesity and diabetes in humans.
Juvenile obesity in particular remains a major medical health concern in America affecting about 20% of youth ages 6-13 years old. Poor nutrition and sedentary lifestyles are implicated in causing juveniles to become obese. A host of complications have been associated with long term obesity including cardiovascular disease, diabetes, impaired skeletal muscle function as well as dementia and decreased longevity. In contrast, short term obesity is not typically associated with such profound complications. For this reason, a new study published in American Journal of Physiology – Regulatory, Integrative and Comparative Physiology focused on just what happens to blood vessels in the early stages of obesity that might make them more prone to such severe complications later on.
The normal job of insulin in the body is to lower blood sugar by promoting uptake into tissues like skeletal muscle and fat. Another job of insulin is to improve the delivery of glucose and insulin to these tissues as well as the brain by causing blood vessels to dilate (i.e. widen). The new study showed that Ossabaw pigs consuming a high fat diet became more sedentary and dilation of arteries in their skeletal muscle and brain were impaired because of impaired insulin signaling in the tissue. In fact, blood flow to the brain (but not skeletal muscle) was actually reduced, which may indicate premature aging of the blood vessels in the brain. These findings are interesting as they show that vascular disease starts earlier in the brain than in other tissues.
Sources:
IL Brisbin Jr, MS Sture. The pigs of Ossabaw Island: A case study of the application of long-term data in management plan development. http://wildpiginfo.msstate.edu/the%20pigs%20of%20ossabaw%20island-case_study.pdf
TD Olver, ZI Grunewald, TJ Jurrissen, REK MacPherson, PJ LeBlanc, TR Schnurbusch, AM Czajkowski, MH Laughlin, RS Rector, SB Bender, EM Walters, CA Emter, J Padilla. Microvascular insulin resistance in skeletal muscle and brain occurs early in the development of juvenile obesity in pigs. American Journal of Physiology – Regulatory, Integrative and Comparative Physiology.