A recent review published in the American Journal of Physiology – Regulatory, Integrative and Comparative Physiology explored the link between sleep apnea and cancer (4). More and more people are living with sleep apnea. In fact, current estimates indicate that up to 24% of men as well as up to 5% of women have obstructive sleep apnea (4). Individuals with sleep apnea experience repeated cycles of low oxygen (hypoxia) and reoxygenation throughout the night. During the hypoxic episodes, carbon dioxide also builds up in the body, which is called hypercapnia (4).

Sleep apnea is a major health concern as it is linked with higher risks for developing metabolic disease, cerebrovascular and cardiovascular diseases, diabetes, cognitive dysfunction as well as increased risk of developing cancer (4). Because solid tumors grow rapidly, the cells can become hypoxic as blood vessel growth in tumors is often abnormal. The cancer cells adapt by creating new blood vessels to supply oxygen, a process called angiogenesis. Intermittent hypoxia can also weaken the inner lining of blood vessel walls thus allowing tumor cells to escape into the blood (4). Activation of hypoxia inducible factor (HIF) is also thought to play a major role in tumor development with intermittent hypoxia. When activated in tumors, it promotes tumor cell survival and resistance to chemotherapy (4). 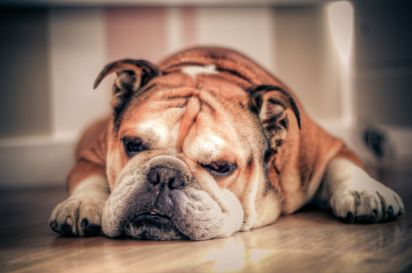 Image of English bulldog by Aobranc via Wikimedia Commons

Sleep apnea is not a problem unique to humans. although spontaneous natural development of sleep apnea in animals is rare (5). In 1987, researchers published a study in the Journal of Applied Physiology that showed English bulldogs naturally develop sleep apnea as well (2). Similar to humans, bulldogs with sleep apnea are more prone to forming blood clots (3). Although English bulldogs have a reportedly lower risk of developing cancer than other breeds, this lower risk is thought to be related to their shorter lifespan due to other health problems as cancer is a disease of aging (1). It should be noted that English bulldogs are known to be at risk for developing lymphoma as well as aortic or carotid body tumors (1).

Other animals prone to sleep apnea are obese Yucatan mini-pigs. Unlike English bulldogs, sleep apnea in these pigs appears to be attributed to obesity (5).

Interestingly, humans appear to be alone among the primates when it comes to developing sleep apnea as there are currently no known species of primates that naturally develop the condition (5).