Physiology of diving animals: how do they deal with hypoxia?

Dr. Jose Pablo Vazquez-Medina (pictured at right), a comparative physiologist at the University of California – Berkeley, was scheduled to present several ongoing studies from his lab at the Experimental Biology conference last month. Dr. Vazquez-Medina is a member of the Comparative and Evolutionary Physiology section of the American Physiological Society. Although the conference was cancelled due to Covid-19, Dr. Vazquez-Medina has agreed to share his research with us.

Kaitlin Allen, a graduate student working in Dr. Vazquez-Medina’s lab has been studying how the vasculature of northern elephant seals (Mirounga angustirostris) cope with bouts of hypoxia that happen when the animals dive. During extreme dives, their blood oxygen concentrations drop up to 90%! Such low levels of oxygen would cause inflammation and oxidative stress in the vasculature of many animals including humans. But seals seem to resist such damage. As the inner lining of their blood vessels are exposed to these drops in oxygen, her research is aimed at figuring out how these cells protect themselves during hypoxic challenges.

Undergraduate student Emily Gibson has also been working with northern elephant seals. Her research focuses on another extreme adaptation in pups. After nursing for only one month, the pups typically fast for two months, during which time they can lose ~25% of their body weight while growing their muscles and developing their diving ability! Her research is examining how this normal fasting period impacts DNA methylation in white blood cells extracted from the pups as methylation can alter gene expression. 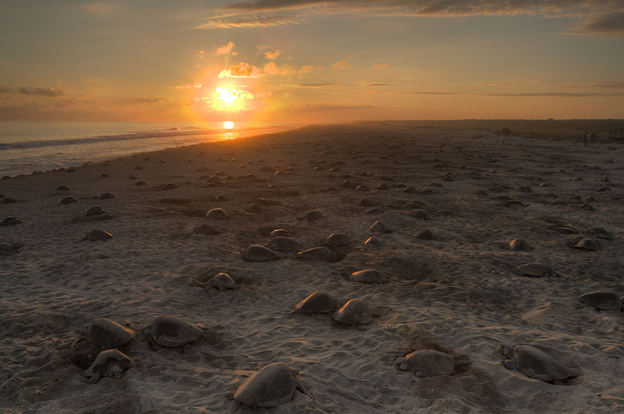 In another line of research, graduate student B. Gabriela Arango, has been exploring variations in blood oxygen concentrations of Olive Ridley Sea Turtles (Lepidochelys olivacea) during nesting alone compared to nesting in large groups up to 25,000 animals. Sea turtles are neat because they fill their lungs with air before they dive and they supplement this oxygen with blood oxygen stores.